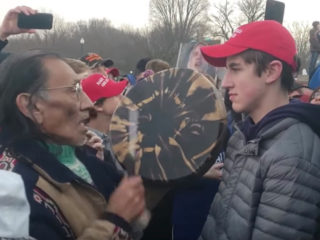 Like everyone else who listens to any amount of mainstream media on a regular basis, I heard the story of the racist kids from Kentucky wearing Make America Great Again hats and taunting a tribal elder in DC at the Women’s March. I tuned it out as a psyop immediately for numerous reasons. With stories like this I am often reminded of the scene in The Mission where the cardinal about to order devastation upon the Indians in Paraguay is rightly troubled by what he is about to do. His aide tries to comfort him by saying, “The world is thus, Your Excellency.” The cardinal replies, “Thus have we made the world.” Reports of obnoxious and overtly racist kids crashing the Women’s March wearing MAGA hats and attacking Native Americans are meant to convince us, “The world is thus.” I see how inorganically these incidents (to the extent they are ever accurately reported) have emerged and I think, “Thus have we made the world–are we making the world.” And I refuse to participate by engaging in the dialectical bait even intellectually. But the story did end up engaging me in the end….

At first the dialectic was “privileged white racist Trump supporting teenage boys menace peaceful Native American elder engaging in a call to prayer.” Not much of a dialectic really–who’s on the other side of that? The boys are not sympathetic–a dialectic has to have adherents on both sides to drive toward a pre-planned solution. (The dialectic is simply understood as Thesis-Antithesis-Synthesis or Problem-Reaction-Solution.) This wasn’t really a dialectic, just another pulse in the “Trump’s America Is a Racist America” meme. But then something strange happened. As other videos emerged, it became clear that the story offered by the Native American, Nathan Phillips, and his supporters, was false, and the media had accepted their narrative of this out-of-context moment with very little to go on but bias. No matter…as Saul Alinsky advised, if your original goal isn’t achieved, take the outcome as it is and turn it toward your own interests anyway. That is, you get lemons? Make lemonade.

And so it was done…(read more)

Scroll back to top